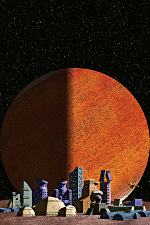 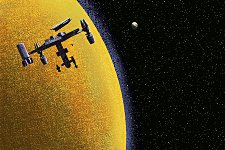 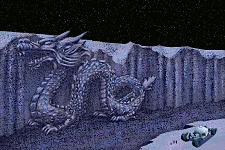 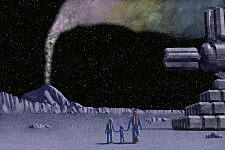 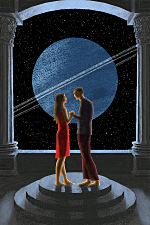 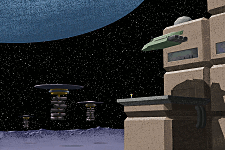 According to my hard drive I first conceived of this project in or around October of 2012. The goal was to tell a futuristic story that takes place in The Solar System with each postcard design corresponding to a location, then actually create and send the cards to someone. While I don't have any notes to say otherwise, it's possible I was inspired by Steve Thomas and his series of retro-futurism space travel posters. I know I was familiar with his illustration back then, but I'm not sure I was aware of his space series until after NASA's "Visions of the Future" project in 2014. My early sketches have text on some of the postcards, but I later found it distracting and recomposed them without. This is partly intentional to separate my work from the massive amount of retro-futuristic space stuff out there without compromising my vision, which is telling a story with postcards.

The huge gap between conception in 2012 and completion in 2019 has everything to do with the story, which I shelved for years at a time. (It vaguely resembles a fan fiction in the Descent video game universe.) My first draft was extremely dark. I wanted a strong juxtaposition between travel postcards, which are generally seen as fun, and a story what was anything but. The final rewrite is still rather dark, but not as grim as before and maintains all the main story points. Plus, it took several drafts to make the cards read as a 1st person account who didn't sound like a narrator. This meant each card has to be short, dense, and leave a lot to inference while still making the main character engaging. I'm not sure I accomplished it.

Making the cards was fun and I'm quite happy with the result. Since these are homemade and uncoated they got really beat-up in the mail, which was exactly what I wanted to happen (they are color laser prints on card stock). The Triton Project is more or less a proof-of-concept work. By the time I started mailing the cards I had already thought of several ways I might do it differently.